You are here: Home / The Society / History of the Society 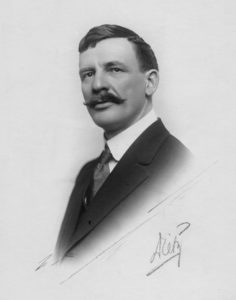 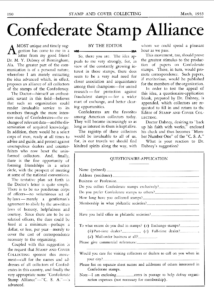 The Civil War Philatelic Society began in February 1935 when Dr. Marye Y. Dabney suggested to August Dietz that a national society of Confederate collectors should be formed. The name suggested by Dabney was the Confederate Stamp Alliance (Alliance). Dietz agreed with the idea and printed the prospectus illustrated at right in the next (March 1935) issue of Stamp and Cover Collecting (SCC). He wasted no time in forming the new society. In the May issue of SCC, he prepared and illustrated what became the logo of the alliance (illustration below). The same year the Alliance was formed and Dietz was elected as the first president (illustration at left). By early 1937, only two years after its organization, the Alliance had 81 members. The first meeting of the members of the Alliance occurred at Asheville, North Carolina, on August 28, 1937.

During the early years of World War II membership in the Alliance stagnated. In 1944, under the leadership of Haydn Myer as Secretary-Treasurer, the Alliance was revitalized, and a new era of growth and enthusiasm commenced. The tradition of an annual convention and Southern Supper began in 1945 at Newark, New Jersey where the Alliance held its second meeting. This meeting was followed with one in 1947 at the great international exhibition in New York. It was during the preparation for this event that the Alliance prepared a constitution and by-laws providing the organizational framework still in use today.

By 1946 there was a recognized need for an authentication service that focused solely on Confederate stamps and postal history. To meet this need an Authentication Committee was formed to expertise items submitted by members. Over time non-members were allowed to use the service. In 2007 the name was changed to Authentication Service.

In 1956, the Alliance started its own official publication, the Confederate Stamp Album. In 1960 the name was changed to the Confederate Philatelist (CP). In 2008 the CP became a full-color journal. Over time the journal developed into an award-winning publication.

Bolstered by the swelling ranks of new members, the Trustees took steps to put the organization on permanent footing. In 1968, the Alliance filed for incorporation as a non-profit corporation in the State of Alabama.

In 1973, Gerald V. Stewart bequeathed his entire Confederate collection to the Alliance. The collection was sold at auction and the proceeds used to establish the Educational Trust Fund that bears his name. The receipt of this gift and the prospects of other gifts caused the Alliance to apply for tax-exempt status which was granted in 1977.

Since receiving the tax-exempt status the Alliance has received many more gifts, the largest and most significant being the “Freeland-Hill-Gallagher Reference Collection.” This collection of Confederate fakes, forgeries, and fantasies formed by the Rev. Paul Freeland is now available to students and researchers through the generosity of the John R. Hill, Jr., and Scott Gallagher.

The many financial requirements of the Society of today can no longer be met by membership dues alone. This realization prompted the Trustees, in 1988, to establish the Generals Fund to endow the general operations into the next century—and a third fund, The Diamond Anniversary Campaign, in 2009, which far exceeded its original goal of $150,000. These funds are permanent endowments. The income from them is used to enhance and augment the research and publications of the Society, thus assuring continued growth in both size and quality.

Alfred H. Benners (member #46) was the only member of the Society that served in the Confederate Army.