You are here: Home / The Society / News and Events

As part of the Collectors Club of New York Virtual Philatelic Program Series, Trish Kaufmann will present a talk on:

Jenkins Express: Dodging the Yanks along the Rappahannock 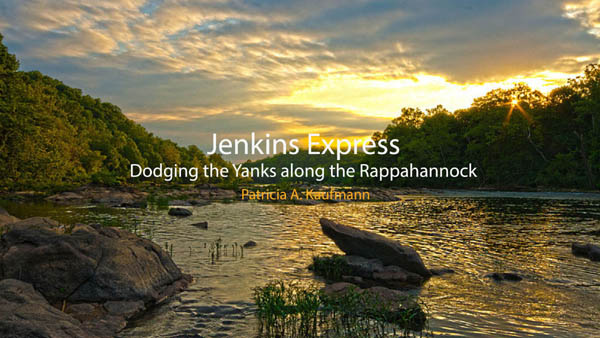 This program examines the two recorded Jenkins Express covers, which were delivered by a paid American Civil War mail service across the blockaded Rappahannock River. Mail was delivered from Confederate troops to their families on the Northern Neck of Virginia. While clandestine exchange of mail is known to have existed between North and South along the river borders of Maryland and Virginia in the Chesapeake Bay, no express company mail had been positively identified before these recently came to light.

The event is free, and open to all. You don’t have to be a member of the Collectors Club to participate.

All you have to do is register at the following link:

The CSA held a Special Meeting of the membership to vote on the proposed changes to the Restatement of Certificate of Formation and the Bylaws. The meeting was held on Saturday, November 21 at 1:00 PM Eastern time.

The majority of members voted by mail or email.    Here are the ballot results:

Having met the two-thirds requirement, the changes passed. 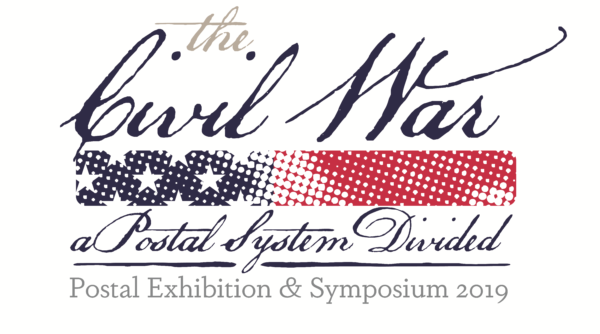 The Civil War Postal Exhibition and Symposium was a three-day event, which began on October 24, 2019, with the dedication of the Kaufmann Civil War Room in the American Philatelic Center in Bellefonte, Pennsylvania. It was followed by a welcoming reception. The standing-room only crowd made it necessary to move to the APS Sales Division area to hear dedication remarks from American Philatelic Society Executive Director Scott English, Thomas Lera, Schuyler Rumsey and featured speaker Patricia (Trish) Kaufmann.    Click here to watch the dedication remarks. 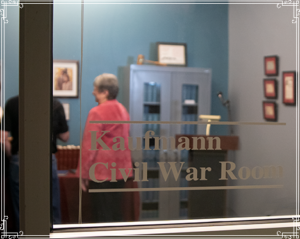 The Kaufmann Civil War Room currently houses literature, including a bound run of the 142 auction catalogs of John W. Kaufmann, Inc., as well as 11 Capital Mail Bid Sales. The room is fittingly painted in blue and gray with philatelic Civil War art on the walls, such as used patriotic covers, Magnus songsheets, a limited edition of a color lithograph of the Hoyer & Ludwig printing press with stamps printed on it, and more.

(lots more photos down below – please scroll down)

Of special interest to CSA members is the Haydn Myer Award for service to the Alliance – a large plaque with engraved names of past recipients from 1951-2001. Boxes of past Alliance records and history were sent to the American Philatelic Research Library years ago and are available for public viewing.

The Kaufmann firm was in operation from 1971 until 1989. John Kaufmann died suddenly in 1988 from a brain aneurysm on his 47th birthday. Trish continued with four more auctions and two mail-bid sales before closing the business. She is now a full-time retailer specializing solely in Confederate stamps and postal history. Her extensive research files will be added to the room only when, as she remarked, she moves on to “that great stamp club in the sky.”

The Civil War postal event, with the tag line “The Civil War, a Postal System Divided,” was sponsored by the Confederate Stamp Alliance in conjunction with the American Philatelic Society. It was designed to be inclusive of both sides of the war.

This World Series of Philately show comprised 125 competitive frames plus a significant Court of Honor showing. Approximately one-third of the competitive exhibits showed Union material. It was a rare opportunity to see what was arguably the strongest showing of Civil War postal material ever assembled in one place.

Douglas Weisz had to withdraw from the competitive class after winning the Single Frame Champion of Champions at Mesa, Arizona, earlier this year with his exhibit “New Orleans in the Confederate Mail System,” which was instead shown in the Court of Honor.

The symposium part of the event featured four speakers who educated postal historians over the next two days to overflow crowds. Frank Crown presented an in-depth postal history research project on the 3¢ Nashville postmaster’s provisional. Dr. Stefan Jaronski discussed the evolution of the Confederate army field post service, while Dr. Daniel Knowles explained the postal history of the Civil War as shown by 31 covers. Daniel Ryterband also told the story of the Civil War and its effects on the mails as told through his exhibit.

Tours of the American Philatelic Research Library (APRL) were offered each day by APRL Librarian Scott Tiffney. Ten retail dealers and three auction houses comprised the specialized bourse, which offered Civil War stamps and postal history. Attendees and exhibitors hailed from as far away as Australia, Sweden and the United Kingdom. The catered awards banquet and reception were sold out.

This event was made possible, in part, with a grant from Robert A. Siegel Auction Galleries and financial support from Mike Farrell, H.R. Harmer GPN and Schuyler J. Rumsey Auctions. Hospitality was sponsored by Daniel F. Kelleher Auctions.

Special thanks go to Ken Martin, Scott English and the APS staff that made the weekend go smoothly,

The 17 competitive and 4 Court of Honor world-class exhibits covered an incredible range of material.   Exhibits in PDF format will be posted to the Exhibits page as they become available.  The Exhibition Palmares is also available as a PDF. 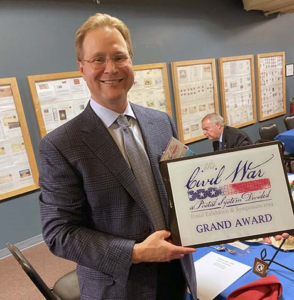 The Grand Award was won by Daniel J. Ryterband, who exhibited “A Country Divided: Effects of the American Civil War on the Mails.” He will compete in the Champion of Champions competition in Hartford, Connecticut, next August at the recently renamed “Great American Stamp Show.”

The Reserve Grand went to Dr. Daniel M. Knowles for “The Development of the Confederate States of America Postal Service from Secession to Appomattox.”

The Single Frame Grand Award was presented to Richard Drews for “Trans-Oceanic Uses of the 30-cent U.S. Issues 1861-68.”

To use the website hover over one of the topics on the main menu to see what is available under that topic. Then click the item you want to view.

For the latest news on Society events, what’s new on the website, and upcoming sales check News Brief.

For Society members – you are requested to go to the Members section and login. This is necessary because all passwords must be reset on the new website.

1) Look for the black bar at the bottom of your screen. You should see two blue buttons on the right side of the black bar. Click on the blue “ok” button. This will create cookies on your computer which are required to process your login.

The “Members > Your Profile” page is still under development, and will be available shortly.

If you run into a problem or need help, or just have a question, contact Mike O’Reilly at webmaster@csalliance.org

Effective 29 March 2019 the Authentication Service Fees are revised as listed on the application form.

The increase in rates is necessary to keep up with increases in postal rates.